Volodymyr Melykh: most important in life is to be always open for something new and never get tired of discovering

Articles Volodymyr Melykh: most important in life is to be always open for something new and never get tired of discovering

on June, 26 KVOTA is celebrating its Birthday

To honor the memory of the founder, we publish the interview that was released in “Hobby” magazine in 2008

With the inventor, design engineer, and director of KVOTA company in Ternopil Volodymyr Melykh, we had a meeting on the day of his new book presentation. I am holding this book now in my hands - a manual, novelty for the injector molding machine adjusters with a somewhat prosaic and technical name the «Plastic moulding under pressure», Nevertheless, for people with technical education, for those whose activities are related to the science and technology, the very title immediately reveals the essence and importance of the book. 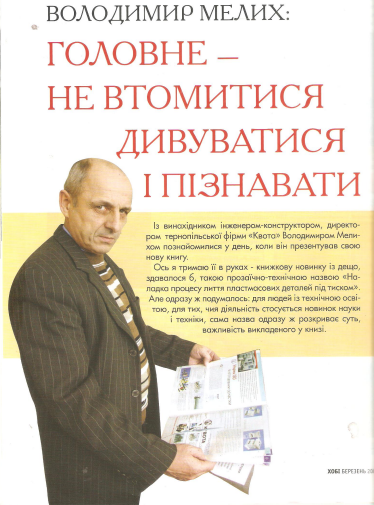 The KVOTA company, which he founded, in addition to distributing and supplying standardized parts, pushers, plates, ejector pins, precision mold parts, is also designing and manufacturing molds with the implementation of hot runner systems.

The company has long been cooperating with business partners from France, Germany, Austria, Switzerland, Poland. From there, various materials for tool production are supplied to Ternopil. Afterwards the finished products are shipped from the KVOTA warehouse to the consumers - mainly, factories in Kyiv, Kharkiv, Zaporizhzhia, Dnipro, Donetsk and Lugansk.

At that time, there was not a single reference or methodical literature on this topic in Ukraine. He shared his idea with Polish colleagues Henryk Zawistowski and Szymon Zięba, who were already well known in the business and professional circles of Europe. For instance, Henryk Zawistowski for a long time taught in Warsaw University of Technology WUT subjects related to the processing of plastics, he co-authored five technical publications and more than one hundred publications and is the founder of the firm PLASTECH-H Zawistowski. Szymon Zięba works at the mentioned University, specializing in plastic processing optimization. They supported the idea to publish a professional book in Ukrainian - and a few months later the book was released.

From the conversation with Volodymyr Melykh it is clear that the book that was published under his editorship is a kind of quintessence of a hobby that this man has had for a long time.

The world of technology, in particular, electrotyping (galvanoplasty) and the production of plastic products - Volodymyr Melykh’s hobby, which was shaping his entire life. Childhood, youth, student years were filled with toy designs/plastic construction toys, own models of airplanes, cars, various mechanisms - this is the environment in which Volodymyr was finding his inspiration.

He recollects that during school time he has made a "hybrid" motorcycle and a bicycle by himself. And this "miracle of technology" had been for a long time the main mean of transportation and entertainment for the boys of the whole street. Later he made a tractor out of old spare parts, which made it easier to work in the garden and made the process of plowing, hilling, harrowing the ground more efficient.

Books, books, books ... He stayed till late at night in the reading room in the library. At home he was reading such magazines as: "Technology and Youth", "Science and Life", "Knowledge and Work". All this made Volodymyr choose the profession of an engineer and graduate from a Polytechnic University (Ternopil Department of Lviv Polytechnic National University).

Volodymyr was helping with the homework not only his classmates, but also students who were accomplishing the distant education. Already being employed on the factory he has climbed the career ladder from the apprentice up to the leading designer-engineer of the best research and production enterprise in Ternopil, Tekhinmash. He was also engaged in R&D’s projects in the field of electrotyping (galvanoplasty) and packaging.

With the collapse of Soviet Union, he has grounded his own company. In constantly changing market conditions, he has managed to unite the coworkers around one idea - integration into the international market. Volodymyr Melykh has understood that for this purpose it was necessary to introduce modern technologies and high-quality standards into production. Therefore, as a vector of its activities the KVOTA company has chosen the provision of technical assistance to help Ukrainian enterprises that produce equipment for various molds and industrial dies enter the European market.

In these fields of industry Volodymyr Melykh has added new innovative ideas to the already existing patens in electroplating. Such innovations were related to the development, design, production of modern equipment of plastic masses.

Together with adherents, he introduced hot runner systems into plastic production. The essence of such novelty is that a compressed substance, from which the prototype/detail should be produced, is going through zero-waste production. In this case the manufacturer receives high economy of raw materials, time reduction and waste/defects diminution. Additionally, there is downturn in energy consumption for one technological process. All it leads to the improvement in the products’ quality and decrease of the prime cost.

The innovations introduced by KVOTA enabled use of the standardized components that shorten the molds manufacturing time, reduce the materials’ consumption, and extend the lifecycle of the products.

Today, company founded by Volodymyr Melykh is the representative of the Polish company FCPK BYTOW, which is a part of the American Corporation "Superior Die Set Corporation". The last mentioned has more than 80 years of experience and the tradition of tool making.

Following the novelties of scientific and technological progress, Volodymyr Melykh, the inventor of almost a dozen inventions, says that the basis for the progressive development of any enterprise and of the whole society is the longing for knowledge.

Volodymyr Melykh has experienced this all by himself. His technical inventions were implemented by many enterprises, as well as by scientific research institutes of Ukraine and Russia. Even Israeli scientists were interested in his inventions for the dehumidification for various radio devices.

Volodymyr Melykh believes that a person should never lose his/her child’s ability to be surprised and passionate with everything new, but must adjust themselves to discover and explore. The technological inventions, (according to my interlocutor), - are the forms of creative thinking that requires significant intellectual, emotional, physical strength needed to create, test, or experiment. Life without such challenges and passion is dull.

In the Melykh family everyone appreciates and respects the work of others. Volodymyr’s spouse Yulia – is a director of the company; older daughter Olga studies on the Master Program at the National University of the Kyiv-Mohyla Academy - this was Olga who has helped her father translate the manual for injector molding machine adjusters from Polish into Ukrainian - younger daughter Katya, currently in a ninth-grader, also studies well and is very talented person. No wonder: every creative personality, namely Volodymyr Melykh, is always generating around himself a powerful energy field that gives strength and inspiration to those who are ready to discover, admire and explore the world.